Discretion and Disparity in Federal Detention

Discretion and Disparity in Federal Detention

The uniquely American phenomenon of mass incarceration plagues the pretrial space. People awaiting trial make up roughly 20% of those held in criminal custody in the United States. Largely overlooked by bail-reform advocates, pretrial detention in the federal criminal system presents a puzzle. The federal system detains defendants at a much higher rate than the states-more than 60% of U.S. citizen-defendants were detained pending trial by federal courts last year. But federal defendants virtually never fail to appear in court, and they are rarely arrested for new crimes while on pretrial release. And unlike state court systems, cash bail is disfavored in federal courts. Most federal defendants who are released pending trial are released on personal recognizance or unsecured bond.

More importantly, a disparity analysis that recognizes the intersectional relationship between race and gender paints a more complex picture. The most extreme racial disparities are among male defendants-where Black men are four percentage points and Hispanic men are six percentage points more likely to be detained than similarly situated white men. Among female defendants, however, racial disparity presents the opposite relationship: Black women are more likely to be released pending trial than Hispanic and white women. Notably, this disparity pattern for women does not appear in other studies of pretrial detention in state courts, where white women are often the most likely race-gender group to be released. Based on this empirical evidence, the Article assesses several possible legal changes to address disparity, including amending the federal Bail Reform Act to allow judges to consider costs in detention decisions, limiting or prohibiting the consideration of dangerousness, expanding appellate review, and narrowing or eliminating statutory presumptions of detention. The Article ends by offering cautionary lessons for states embarking on bail reform. 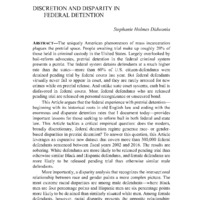