Globalization, Lawyers, and Emerging Economies: The Rise, Transformation, and Significance of the New Corporate Legal Ecosystem in India, Brazil, and China

Globalization, Lawyers, and Emerging Economies: The Rise, Transformation, and Significance of the New Corporate Legal Ecosystem in India, Brazil, and China

Beginning in the 1990s, India, Brazil, and China have each developed a distinct corporate legal “ecosystem,” comprised of new (or newly repurposed) domestic corporate law firms, foreign law firms competing (on the ground or virtually) to serve both foreign and domestic clients, general counsel offices of both domestic and multinational companies, and law schools either designed or retooled to supply lawyers qualified to practice corporate law. In this Article, we utilize data from an unprecedented set of
empirical studies to document the rise of this new corporate ecosystem in these three important emerging economies, and to develop grounded theory about the forces that have produced this transformation and that help to explain differences among the ecosystems that have developed in each jurisdiction. Specifically, we argue that differences in what we call the “micro-level gearing” in the relative importance of the three key elements in the corporate legal ecosystems that have developed in India, Brazil,
and China—law firms, clients, and legal education—can be explained, in part, by differences in what we will call the “macro-level gearing” in the relative power of the state, the market, and the bar—both between all three countries and the United States, and among the three jurisdictions. This difference has been most pronounced in China, where the dominance of the “state gear” in shaping the corporate legal market contrasts sharply with both the U.S. “market” driven model, and the influence of the “bar” in shaping the micro-level corporate ecosystems in India and Brazil. We conclude by offering some tentative thoughts about the implications of our findings for a rapidly globalizing corporate legal services market in which a growing number of states are beginning to exert greater control at the macro-level. 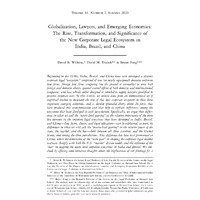