Legal history has changed a lot since Hurst. A large secondary literature has appeared within and outside law schools, and many more legal historians have been appointed. The field has also moved in new directions such as gender and sexuality, race and the significance of the Civil War, borderland citizenship, and viewing legal history through the lens of imperialism, colonialism, and Atlantic World studies. Over the last 30 years, Hurst’s interest in the history of capitalism and economic growth diminished, but in the last ten years it has become central again through the lens of slavery studies, particularly the debate over whether slavery and slave law were capitalist or anti-capitalist. A debate has developed about the origins of anti-slavery conventions from older sources or modern human rights conventions. Another shift that has occurred away from Hurst’s focus on statutes toward story telling from trial transcripts and finding the voices of subaltern populations. On the other hand, an interesting rebirth of Hurst’s focus is that some of Professor Hartog’s Indian students see his work as relevant to post-colonial history in India.

In retrospect, Hurst’s work had strengths and weaknesses. In framing the history of capitalism, he largely ignored oppressed and unrepresented groups, but he did recognize the ruthless greed of the communal “we” that plundered the northern forest. His brilliance came in framing lawmaking as an exercise of improvised social construction cutting across doctrinal areas guided by an underlying consensus of economic liberty and constraints (constitutionalism).

Law students can learn important lessons from a legal history course. One is the historicity of law viewed from the outside as influenced by context and from the inside as having its own sense of history and context. Reflecting a “living law” perspective, Chief Justice Warren in the Brown case said that we can’t know what the drafters of the 14th Amendment intended, but we must decide what it means today. Justice Scalia adopted the more conservative approach of originalism, but adherence to the text of the Amendment is what preserves birthright citizenship. Courts generally reflected societal views on same sex marriages as they changed drastically over 20 years. Professor Hartog wrote a book on slavery and freedom in New Jersey which highlighted the concern of legislators that freed slaves might end up on tax-supported poor relief rolls, especially given high rates of interstate mobility. The book follows Hurst in tracing legal change to multiple influences that cut across doctrinal categories (e.g., taxation, not just emancipation) but departs from Hurst on the importance of migration. Law and economics, sometimes viewed as the rival of legal history, reflects the historical influence of economic forces on law and judges’ awareness of such considerations. As for acceptance of legal history among law students, Professor Hartog experienced a great deal of skepticism at Indiana when he taught legal history as a required course but very little when he arrived at Wisconsin, undoubtedly because of Hurst’s legacy.

Periodization in history offers an interesting perspective on Hurst. Hurst saw a long period of consensus
and conflict around economic liberty and regulation continuing perhaps to the present day and was not interested in conventional periods dated by Presidential terms or conventional labels (e.g., the Gilded Age). Historians since Hurst might emphasize longer and wider periods such as the international slave trade. Immigration and race is another recent example of interest to historians dating from the Chinese Exclusion Act. The idea of an underlying broad consensus is something that may have been lost in recent historical studies. 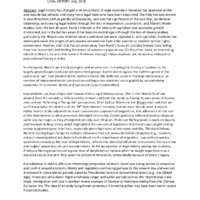