This interview of Herman Goldstein (by Bill Clune) discusses the impact of the American Bar Foundation study of the criminal justice system on the innovative criminal law courses developed at Wisconsin, namely Criminal Justice Administration, and Goldstein’s courses on problem-oriented policing. Frank Remington was the director of research of that study and Herman Goldstein was a field researcher. Four radical changes from the previous model of teaching criminal procedure (which mainly covered Supreme Court cases) were: (1) the idea of an interconnected system, from first contact with the police all the way through to parole and corrections, (2) the pervasive role of low visibility discretion at every stage, (3) the differential impact of police interventions on different groups of people (e.g., homosexuals, poor, minorities), and (4) the importance of distinct behavioral problems as to what occurs in the criminal justice system (e.g., street prostitution, public intoxication). An interesting instructional insight is how these features emerged in the classroom, for example, as Remington explored the appropriateness of aggressive police surveillance (e.g., wiretapping, stings), for various behaviors (e.g., street prostitution, shoplifting, organized crime, and terrorism). Important impacts of the Wisconsin work were changes in how criminal procedure is taught at many law schools, administrative regulations of police-citizen interactions (e.g., street prostitution, use of force), the development of alternatives to incarceration (e.g., intoxication, mental illness), and the prolific growth of the field of problem-oriented policing across research, policy, and practice, and of related fields such as environmental criminology. 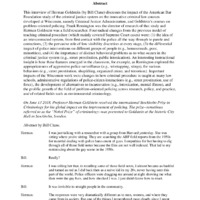