This paper (a work in progress not to be quoted or cited without permission) has three fragments or parts, first, an overview of what is it like to do legal history today, second, Willard Hurst’s distinctive view of legal history, with its significant omissions and flaws, and, third, notwithstanding these flaws, reasons why Hurst’s work is admired and relevant to this day. Hartog taught legal history at Wisconsin while Hurst was an Emeritus Professor, considers Hurst a mentor, and has regularly assigned readings from Hurst in his own courses.

OVERVIEW: Legal history involves a love of legal sources like archives and trial transcripts which require the historian to look beyond the law library. It is about but does not cause big major changes, such as feminism. As taught in law schools it represents a kind of humanism, an understanding of past choices and lost alternatives, and a sense of modesty and normative restraint. It also brings a critical posture toward conventional legal histories, the histories within law, lawyers’ histories, as well as toward conventional narratives of legal change, such as evolutionary or leftist determinism and originalism. But is legal history anything more than humanism and a critique of bad history within law? Willard Hurst certainly thought so.

HURST AND LEGAL HISTORY: The second part of the paper examines Hurst’s views as illustrated in Hurst’s book published in 1965, Justice Holmes on Legal History, as well as other works. Hurst agreed with Holmes on the importance of “will” as a creative force, which Hurst called individualism. Hurst’s individualism, while a source of energy, was not idealized, as it contained strong elements of fallibility, greed, ambition, and waste. Hurst saw American legal history in terms of sequence and context, a contingent consequence of American democracy. He agreed with Holmes that that law expressed the cumulative expression of deeply held values which led to the large and durable patterns we call institutions. For Hurst, these deeply held values were the middle-class point of view (individualism) and constitutionalism as both an enablement and a constraint on self-interest. The creative potential of individuals was released through laws such as property, contract, and business corporations. For Hurst, these embodied a faith in “manipulation and contrivance to increase yields from nature and social relations” (other people). Limits on these freedoms were created because of the abuse of power. “Constitutionalism” referred to representative democracy and the police power rather than constitutional law made by judges. Hurst was part of the Lochner generation in viewing the Supreme Court as an obstacle to benign social legislation (such as workers’ compensation for accidents). And he could not imagine constitutionalism as an expression of group or democratic aspirations.

Hurst thus imagined a continuing community of politically competent Americans who made the policies and the laws and who constructed legislation in their image from the 19th century through the New Deal up to 1960, a view that seems to define American civilization yet leaves out much of American legal history. Omitted were the many groups who were excluded from democracy (women, African-Americans, Native Americans), and those injured by law, for example, by the fugitive slave acts and legal violence of the federal government in expropriating Native American lands (such as by the rights sought by the Pikes Creek settlers featured in Hurst’s widely read 1956 book, Law and the Conditions of Freedom). Hurst’s view of history as a gradual evolution toward the national economy culminating in the New Deal paid little attention to political parties, race conflict, populist crises, waves of immigrants, progressives, and labor movements. He saw constitutional rights as the enemy of benign social legislation rather than as a counter majoritarian source of power, a view that gained strength beginning in the 1960’s at the same time that he was writing. He showed no interest in the mobilization of subordinated classes and was dismissive of new left historians during the time that Hartog was at Wisconsin. His view of a homogenous American culture was shattered by the drastic cultural fragmentations that occurred toward the end of his career. A recurrent puzzle is Hurst’s lack of historical periodization that other historians would recognize as distinctive phases of development (for example, ecological problems and policies other than Hurst’s brilliant work on the destruction of Wisconsin’s northern forests). A disturbing note is Hurst’s citation in his Holmes book of Buck v. Bell as an example of how society should take steps improve health and technology, roughly the same rationale invoked by Justice Holmes in his opinion for the Court refusing to strike down the Virginia law requiring compulsory sterilization. Hartog does not believe Hurst was racist or eugenicist, rather that he saw the law as a plausible exercise of the police power, which for Hurst also included public education, public health, roads, and social. But, written in 1965, it was another example of how Hurst had grown out of step with the times.

HURST'S RELEVANCE TODAY: Despite the flaws, there remains much to admire and emulate in Hurst’s work. First, Hurst’s emphasis on the ideal of a middle class as a unifying force is validated by the long struggles of groups since the Civil War to become middle class as the only way to gain access to the legal benefits and rewards that America offered. Second, what excites Hartog about Hurst’s portrayal of American law is his willingness to look at law as a human activity that takes shape across legal/doctrinal silos. All rights, Hurst wrote, were “limited by the neighborhood of principles of policy which are other than those on which the particular right as founded.” His willingness to imagine legal fields as united by common problems and by a shared culture and common context stimulated a legal history that crossed challenged and transformed legal doctrine. Third, disdaining a search for origins (the notion that the past contained the germ of an answer to legal problems), his work is remembered for always starting in the middle of things. Legal and economic pasts were understood retrospectively and adapted. Fourth is his focus on contingency. Contexts would always bleed into new sequences. He said that “the life of the law represents no homeostatic functionality or self-adjusting process but the product of the qualities and defects of men’s will, and feeling.” This meant for him the law was fundamentally legislative and character, and ”the secret route from which law draws all the juices of life is consideration of what is expedient for the community concerned.” In that sense one might say that for Hurst law was always politics, even if he seemed unconcerned with party politics, and that led him to a critique of what he called organic metaphors and evolutionary portraits of legal change. The middle class may have defined much of law in crucial moments of American history, but those middle-class manifestations of law were dependent on contingent, accidental decisions and relationships of many men and women and institutions who differed and fought about many things. He did not emphasize the explicit political struggles that underlay those decisions, but no reading of Hurst can escape a sense of the constant and continual underlying presence of the struggles. In that sense, his writings prefigure the strongest features of what would became critical legal studies. 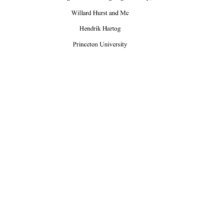