Interview of Walter Dickey by Bill Clune, Tuesday, May 22, 2018, on the Criminal Justice Administration course

Interview of Walter Dickey by Bill Clune, Tuesday, May 22, 2018, on the Criminal Justice Administration course

Walter Dickey took Criminal Justice Administration as a student when it was an optional 3-credit second-semester course and taught the updated required version when he joined the faculty in 1976 and began collaborating with Frank Remington and Herman Goldstein. At the time, both Remington and Goldstein were interested in teaching the course as a study of how to make the criminal justice system more fair and effective in reducing threats to public safety with the least possible harmful side effects. The starting place for both views was the behaviors that came to the attention of law enforcement. The course was organized to encourage analysis of a set of common questions: what is the behavior that attracts law enforcement, how does law enforcement learn of the behavior, what is the response, how fair and effective is the response, and how could authority be conferred in a more effective manner.

With his problem-oriented policing, Goldstein emphasized solutions beyond criminal law, while Remington believed that the system itself must and could be improved, but there was considerable overlap and mutual reinforcement, as illustrated by the problem of public intoxication. With Remington’s guidance, Wisconsin became the first state to allow police officers to place intoxicated individuals in detox centers rather than jails. Incarceration of drunks, often for one night, had been one of the most common functions of law enforcement and was essentially a failed social experiment. In an example of problem-oriented policing, Goldstein developed a complimentary solution that did not involve law enforcement -- a token system by which bartenders could offer intoxicated patrons a token for a cab ride home and another for retrieving their cars in the morning. Another example fitting the general framework (of law enforcement investigation and response) was stop and question or stop and frisk, an intrusive practice that had been shown to have strong negative effects on public safety due to loss of community goodwill and citizen cooperation with the police. Remington was instrumental in developing Wisconsin legislative guidelines for when such stops were justified, the factual predicate required for police intervention. An example of a particularly harmful policy was the Ramparts program in Detroit where police decoys posed as unconscious victims, and the police ended up chasing and killing people who tried to rob the undercover officers. A parallel example at the federal level was ABSCAM, a much-publicized incident where undercover FBI agents solicited bribes from public officials. U.S. Attorney General Edward Levi asked Remington what the predicates for such “sting” activities should be, as well as other covert surveillance, leading eventually to a set of federal guidelines (guidelines subsequently diluted after 9-11 by the Patriot Act).

Remington had a legal process view of the criminal justice system, successfully arguing that when legal process was removed as a first-year requirement Criminal Justice Administration should take its place as a required first year course. He regarded Supreme Court decisions as ineffective because they ruled out specific activities but otherwise left unlimited authority in place. He preferred legislative or administrative rules as long as they were carefully tailored to the behavioral problem and the complexities of criminal justice (for this reason doubting the utility of applying the standard rules of the Administrative Procedure Act).

The Criminal Justice Administration course was (and is) an outstanding example of integrating empirical knowledge about the law into a law course. The large American Bar Foundation survey of criminal justice, which Remington helped direct, was revolutionary in revealing how the system actually operated in practice. Faculty from other prominent law schools visited Wisconsin and attended seminars built around those findings and left with ideas for modifying their own courses. One such seminar attended by Dickey he called perhaps the most intensive intellectual experience of his life. Social scientists involved in the survey had enormous positive influence, including Herman Goldstein and Don Newman at Wisconsin, and Lloyd Ohlin at Harvard. Goldstein, Remington, and Dickey stressed that “cops know things,” as when one officer identified a book seller on campus who was serving as a fence for stolen coursebooks by not asking for identification and sponsored regulation that required ID, and another officer who sponsored municipal regulation of pool tables the confined location of which he had determined was responsible for many bar fights. More broadly, Remington viewed empirical facts as essential for problem solving in criminal justice. Remington advised Dickey, early in Dickey’s career at UW that rather than write a doctrinal article on reckless murder thereby retreating into the ivory tower, “the young professor should, with knowledge of accepted wisdom about an intractable problem, search out new knowledge, previously undiscovered facts, missed connections between facts, and by an act of imagination place that new knowledge in revealing relationship to what is already known.” Walter Dickey and Michael Smith, What We Do, The Gargoyle, Spring/Summer 2002, https://perma.cc/3Q49-9VH7

Clinical programs at Wisconsin offered hands-on experience and many empirical findings. The Legal Assistance to Inmates clinical program (LAIP), directed by Dickey, exposed students and faculty to multiple versions of sentencing systems (guidelines, determinate, indeterminate) and allowed access to pre-sentencing reports that yielded rich insights into the people who were accused of crimes and their encounters with the system. In LAIP, the presentence report served as the best statement of the factual basis for the crime, usually more complete than the guilty plea. It also was the basis for prison classification and parole decisions, both release and revocation. Staff realized how frequently errors were made and often tried to correct them, particularly in the Federal “mandatory” guideline system. Dickey wrote an article about the importance of accuracy in the sentencing report. In later years, presentence reports were used as “problems” in sentencing, and as useful illustrations in the work of Dickey and UW Law Professor Michael Smith on model sentencing. Dickey and Smith developed model sentences as guidance for judges and a “reasoning” process approach to the imposition of sentences, based on the view that sentencing was a legal decision and should be approached by applying facts to a legal standard. This work became nationally and internationally known and influential.

Professor Dickey stressed the importance of listening to clients who often came from different worlds than law students and lawyers, fully informing them, and not overruling their preferences. A common example arose in plea bargaining and probation. Rather than threaten clients that the judge might throw the book at them, Dickey taught students to inform clients about the risks of probation, which could turn into a life sentence on the installment plan due to the many reasons for revocation of probation unrelated to the original crime. Clients should be asked to consider whether a 30-45 day jail sentence might leave them better off. Dickey also stressed the importance of listening and good judgment, qualities not conferred by traditional appellate case analysis.

A point sometimes heard from students was that because of its emphasis on real empirical impacts the course might be viewed as much sociology as law. But many students valued the course greatly, precisely because of the exposure it provided to multiple aspects of the law as actually practiced (far more so than the traditional criminal procedure courses organized around analysis of Supreme Court cases on the 4th, 5th and 6th Amendments). In addition, the professors emphasized that students would be serving in multiple roles impacted by and impacting criminal law later in their careers, such as legislator, community leader, judge, prosecutor, and public defender. True to that thought, Remington and Dickey sent letters to students who had taken the course, 10, 15 years after graduation, asking (in effect), “this is what we were trying to do, was it of value?” 100% said yes, and most said they had never tried a criminal law case. 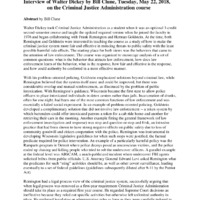