This interview with Professors Cecelia Klingele and Keith Findley is about the course they teach, Introduction to Criminal Procedure, which is the modern version of the course on Criminal Justice Administration developed by Frank Remington and Herman Goldstein. The course emphasizes exposure to the whole system of criminal justice in chronological sequence, the ubiquitous prevalence of discretionary decision making, disparate impacts on population sub-groups, and criminal justice reform.

Whereas traditional courses in criminal procedure are organized doctrinally, fourth amendment, fifth amendment sixth amendment, this course is organized sequentially and introduces Supreme Court cases as they relate to each phase. The chronological phases reviewed in the course begin with how crimes are recognized in the system, the decision to investigate and investigative methods -- call and response, proactive policing like stop and frisk, undercover investigations and surveillance, and problem-oriented policing. Then follow the decision to charge, roles of the lawyer and prosecutor, pre-trial discovery practice, including disclosure decisions by the prosecutor, plea-bargaining, the plea, plea negotiations, what plea to offer, a bit on trials (very few occur relative to pleas), sentencing decisions by the prosecutor, and, time permitting, sentencing decisions by the court. The course covers the important Supreme Court cases as they relate to the chronological stages, but fewer cases are included than in traditional courses because these cases are considered as remote from the real practice of criminal law and are rarely encountered in discussions with practitioners.

The course emphasizes the central role of discretionary decision-making. Discretionary decision-making feels uncertain for students, and discretion is a difficult concept involving reasoned judgment between competing legal principles, rather than arbitrary, unmoored or biased judgments. In the final examination for the course, students must engage with the legal sources that guide discretion, such as the supplemental statute pack, ethnical principles, and ABA standards. The teachers strive to convince students that formulation of policies and standards, such as use of force policies, and differences between policies, can make a real difference.
Students have direct experience of how discretion operates through non-classroom activities such as police ride-alongs, and simulated plea bargaining, assisted by the observations and commentary of prosecutors, judges, and defense lawyers. In addition, four evening discussion panels are mandatory -- on policing (with police chiefs), prosecutors, defense attorneys, and judges. Students get to ask questions. Panelists discuss their roles and the exercise of discretion. All of these activities are generally well received by students.

Disparate impacts on sub-groups and criminal justice reform are emphasized throughout the course. Professor Klingele made anonymized slides of quotes from observations of students in their police ride-alongs for discussion in class. Students can see their classmates talking about such issues as profiling or where economic disparity played a role in someone being entangled in crime in some way. Inequalities also appear in the details of police investigation, appointment of counsel, and standards for indigency. In computing who qualifies for appointed counsel, students see that it is only the truly destitute who qualify and that there is a large middle group of non-affluent people who will be unable to afford an attorney. Further on disparate impact, the materials include sections on stop and frisk, the use of force by police, and mass incarceration and its causes.

The course requires and conveys extensive empirical knowledge about the realities of the practice of criminal justice. Both professors are consumers of social science research which they naturally bring into their teaching. They also have extensive contact with and observation of the system and its various actors, for example, informal interactions with police and prosecutors, and service with various agencies and groups, such as the police and fire commission, the Board of Public Defenders, and the Children and Family Youth Justice Bureau. The non-classroom activities experienced by students in the course require regular interactions by the professors with police, lawyers, prosecutors, and judges. Thus, the empirical knowledge base of the course comes from both formal and informal research, much of the latter embedded in continuing experience in the field. 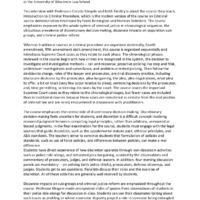