Response To Sanders: Ma'Iingan As Property

Response To Sanders: Ma'Iingan As Property

American law has long recognized the state as the owner of wild game within a state’s borders, including gray wolves (or “ma’iingan” in Anishinaabemowin), within the States of Wisconsin, Minnesota, and Michigan. However, as Anishinaabe scholar Jason Sanders forcefully demonstrates, the Anishinaabeg — indigenous people of the western Great Lakes known as the Ottawa (Odawa), Potawatomi (Bodewadmi), and Chippewa (Ojibwe) — considered ma’iingan siblings, not property. One does not hunt one’s siblings.

Sanders’s paper is a fine example of cutting edge, pragmatic legal scholarship that will allow the stakeholders, in time, to push through the adversarial rhetoric and move into a more useful cooperative mode. Federal Indian law, often through the assertion of American Indian treaty rights, has historically been a powerful engine for change. Treaty rights cases arising from Anishinaabeg treaties often do not result in a winner-take-all outcome, with either tribes or states prevailing over all opponents. Instead, the rule of law as exemplified by Indian treaty rights forces state interests to reckon with the interests of a discrete and insular minority. As such, regulation of hunting, fishing, gathering, and other activities on or near Indian country is an intergovernmental affair, dominated by cooperative fact finding and negotiation. 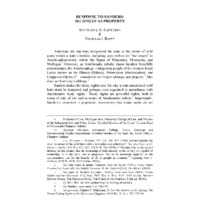