There is an inescapable inconsistency between the general rule that naked (cartelistic) restraints of competition are per se illegal and the treatment of
such restraints when engaged in by self-regulatory professional organizations, standard setting organizations, and various private organizations that regulate competition in variety of athletic and other
activities. Most observers believe that some of that cartelistic regulation may be not only socially and economically desirable but also necessary to serve
the public interest. The judicial effort to explain when cartels or other naked restraints on competition within or between such groups and others are lawful and when they are not has floundered on the lack of specificity of the
“rule of reason” which invites linking any justification for a restraint to some ambiguous assertion of “reasonableness.” The inevitable implication is that any cartel could be lawful if it were reasonable and served some “procompetitive,” “consumer welfare,” or other “public interest” goal. This Article contends that this approach is wrong. Instead, what courts are in fact doing is preempting certain kinds of restraints from antitrust law review, although this is evident only by implication. This Article applies the Carstensen-Roth framework to explain such preemption or exemption. Three elements are necessary: state law, federal law, constitutional law, or some generally accepted public interest goal must authorize the organization to regulate some aspect of the market, the regulation at issue must be within
the scope of that authorization, and the process used to adopt and implement the regulation must be appropriate under the circumstances. Naked
restraints satisfying these elements are exempt from antitrust law review, and courts applying antitrust law should not undertake to determine the
substantive “reasonableness” of such regulations. This framework adheres to the general rule that naked restraints of competition are always per se
illegal unless exempt and provides a clearer basis for determining when and whether a restraint can be lawful. The three Supreme Court decisions
reviewing FTC challenges to conspiracies among dentists to restrict and regulate competition in dental care provide the basis to illustrate and test
this approach. 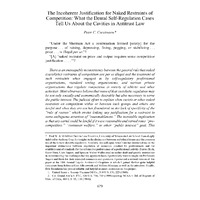