Who's Afraid of the Big Bad (Germline Editing) Wolf?

Who's Afraid of the Big Bad (Germline Editing) Wolf?

Perspectives in Biology and Medicine

Germline genome editing has garnered dire predictions about its societal effects, but experience with other reproductive technologies should caution us about making extravagant claims. Amniocentesis was predicted to result in increased stigmatization of people born with Down syndrome, but in fact people with these conditions have been increasingly integrated into schools and workplaces. Artificial insemination by donor was predicted to result in women choosing to “optimize” their children, but in fact most women eschewed the offerings of the so-called “genius sperm bank,” and when choosing among donors, have tended to look for those who most resemble their husbands and partners. IVF was predicted to cause parents to view children as commodities, but no such change has been evidenced. Preimplantation genetic diagnosis was predicted to become widespread and used for an ever-increasing range of conditions, including those unrelated to serious disease or shortened life span, but this has not happened either. Critics of germline genome editing have argued that even if it were safe and effective, it would inevitably be abused by prospective parents who wish to improve upon what is already predicted to be a healthy outcome, and that this practice would become sufficiently widespread among those able to afford it that we would be creating a new genetic caste system. Before developing policy around such predictions, it is important to learn from the past. 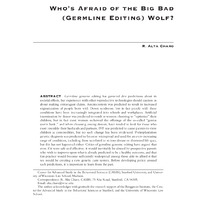