Hannah Arendt in Venezuela: The Supreme Court Battles Hugo Chavez over the Creation of the 1999 Constitution

Hannah Arendt in Venezuela: The Supreme Court Battles Hugo Chavez over the Creation of the 1999 Constitution

Both "proponents" and "critics" of popular constitution-making share Carl Schmitt's definition of the people as outside of unconstrained by, and superior to all law. Critics cite Venezuela as evidence that unleashing the people facilitates authoritarianism. I turn away from Carl Schmitt and towards Hannah Arendt to retell the Venezuelan story and recover an alternative vision of the people called "revolutionary reform." Contrary to Schmitt, Arendt and revolutionary reformists recognize that the people are politically constructed through the "unconventional adaptation" of pre-existing institutions, such as the legislature and courts. In Venezuela, the key moment of that construction was the establishment of the first-past-the-post rule for
the Constituent Assembly. The electoral rule, rather than the invocation of the people, was the turning point that allowed Chavez to eliminate the opposition. On this issue and throughout its case law, the Supreme Court developed a promising, Arendtian concept of the people. However, since the Court failed to fully develop the implications of its theory of the people, it did not make the crucial decisions about the content of the electoral rule necessary to restrain Chavez. 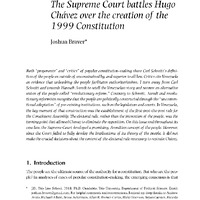