Up Against the Wall: Congressional Retention of the Spending Power in Times of "Emergency"

Up Against the Wall: Congressional Retention of the
Spending Power in Times of "Emergency"

President Trump's border wall has evolved from an ambitious campaign promise into a real opportunity to explore presidential versus Congressional authority to determine how the president spends Congressionally appropriated funds. The president's arguments that he has the power to build the wall under either the National Emergencies Act or the funding provisions of 10 U.S.C. § 9705 or 10 U.S.C. § 284 lack merit-the cited nonemergency-tied statutes do not provide funding for the wall. The former authorizes the utilization of Treasury Forfeiture funds tied to specific law enforcement activities but excludes the ambitious and broad construction project the president proposed- the latter authorizes support only for counterdrug activities. The wall constitutes an unprecedented appropriation
for a project without mooring in statutory language permitting only unspecified minor military construction projects.

It has been long settled that presidential power must stem from an act of Congress or from the president's own Article I powers. That dictum need
not deprive a president of flexibility in the execution of powers delegated to her by Congress or in the execution of power delegated to her by the Constitution. Neither the foreign affairs power to recognize nations nor Commander in Chief authority to repel sudden attacks authorize the
president to spend funds appropriated by Congress for other purposes. The Constitution did delegate to Congress the power to "provide for the common
defense and general welfare" of the United States with the proviso that "no money shall be drawn from the Treasury, but in Consequence of
Appropriations made by law. " That provision does not deprive Congress of the flexibility to delegate power to the president, but here Congress did not
authorize these expenditures and expressly declined to provide funding for "the Wall" on two occasions. Thus, the president's use of Congressionally appropriated funds to build "his Wall" is in conflict with Congress's will and unlawful. So far, though lower courts have agreed with this result, a Supreme Court stay of the decision that enjoined the use of Defense
Department funds in effect permits the president to finalize contracts and begin wall construction pending the resolution of the dispute on the merits
in the Ninth Circuit and the Supreme Court. In its short decision that granted the stay, the Supreme Court signaled that if the case arrives via certiorari
and the Court grants review, a majority will conclude that the Sierra Club plaintiffs have "no cause of action. "If that transpires, the favorable outcome for the president will turn on the nature of the litigants not the legality of the Wall construction project. For those concerned with the preservation of constitutional limitations on the Executive, "better half a loaf than none at all. " 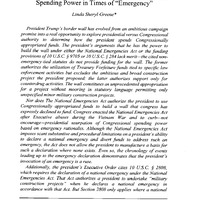