Leaving the Land of Easy Answers: Regulatory Takings, Rucho and the Nature of Constitutional Analysis

Leaving the Land of Easy Answers: Regulatory Takings, Rucho and the Nature of Constitutional Analysis

I use the regulatory takings doctrine to demonstrate the essential role of institutional analysis in constitutional law and the problems created when these considerations are ignored. In the first section of this article, I examine just compensation in a world of costly information and advance the notions of optimal ignorance and optimal arbitrariness. In the second section of the article, I explore the connection between political malfunction and just compensation, the role of just compensation in correcting political malfunction and the basis for shifting the determination of just compensation from the political process to the courts. Here I present an analytical framework capable of understanding both the political and adjudicative processes. In the third section, I use this framework to show the limits of regulatory takings and the impossibility and even perversity of sweeping definitions of regulatory takings. In the fourth section, I review the existing regulatory takings doctrine and explain why it is far less than its advocates desire. In the fifth section, I consider the wisdom of retaining a doctrine that does little but create mischief. In the sixth section, I use the insights from the analysis of regulatory takings to show the inadequacy of constitutional approaches like essentialism and originalism that do not take institutional analysis seriously. Here I employ the issue of partisan gerrymandering to explore the optimal use of judicial review. 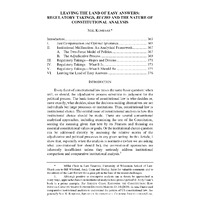